Before we’re digging into Python namespaces, I want to clarify that I’m not that hardcore developer. This is just my attempt to explain Python namespaces to someone who recently started developing Python or is switching from another programming language.

Someone recently asked me:

What are Python namespaces and why do I need them?

To explain it in one single sentence and bring it right to the point:

Now, I’m aware that sounds somewhat fuzzy, so I try to explain that step by step. To learn more about namespaces, you need to know about encapsulation, scoping and names itself. So, let’s go!

What is a name?

If you start developing Python, you immediately come in contact with its dynamic nature. Because of this awesome feature, you can basically name everything in Python. For example and to keep it simple, you can name a string, number, boolean or list:

Technically these are all objects, but that’s not important right now. Though, because of these fundamentals, you cannot only name simple data types, but you can also name functions:

Please note that we didn’t use parenthesis when we were assigning the function spam to the eggs variable. This is really important, as the spam() function is not called at the time of the variable assignment. The following example shows the difference:

As I mentioned before, everything in Python is an object. So, to keep it (really) simple, a variable in Python is just a name or a label which points to an object. But don’t mess up that Python name pointer thingy with memory pointers like you’ll find in C.

What is a namespace?

Obviously, a namespace is a space of names. If you’ve red the official Python tutorial, you’ll find the following definition:

A namespace is a mapping from names to objects.

Well, that’s true and this is exactly what a namespace is. It holds names (aka variables) which map to an object. Of course you can also have multiple names per object:

Here’s an example to show that both names point to the same object (in this case a str object):

As you can see, namespaces are created automatically by Python. Names can explicitly be defined or they can be imported from other Python modules. I’ll explain that below.

In object oriented programming, there’s something called encapsulation, which includes the construct whereas data is bundled with the classes, objects, methods and functions operating on that data. If you read about encapsulation in Python, you’ll often read about namespaces, scopes and finally Python modules.

This whole “magic” is called scoping, and it’s implemented on several levels. You’ll always have your global module namespace, because of that you can do things like:

Functions have a separate namespace:

As you can see, you can access the eggs variable within the spam() function, but not outside of it. This is, because eggs was defined in the function’s namespace and is only available in there.

With classes and objects it gets a bit more complicated. However, here’s a (really) simple example:

When you read about names, namespaces or scoping in Python, you might see the term LEGB. As you can see, the term is built from 4 different letters, which simply stand for the 4 different Python scopes:

Now as we know the different scopes, we need some rules:

This gives us the following graph:

As we now know the scopes and the rules applying for these scopes, we can have a look at some sample code: 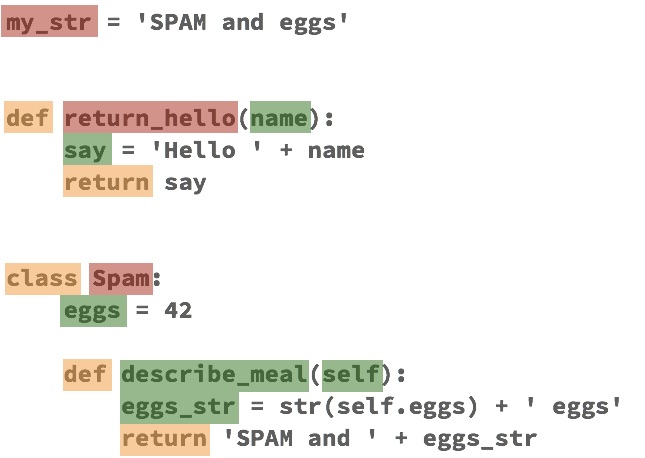 Please note, I won’t cover the enclosed scope here, as I’ll introduce you to enclosures in another blog post.

I’ve already described Python modules (really poorly) before. Now, I’ve told you that each Python module has its own global namespace. But a Python module is pretty useles if you don’t import it, thus we need to have a look at imports. There are several ways to import a Python module and each way will have a different effect.

Here’s the recommended way to import your whole module into the own global namespace:

You can also import specific names from the Python module into the own global namespace:

As you can see, the my_string name was imported while my_number is not available in the own global namespace.

Here’s a way to import all names of your module directly into the own global namespace:

As you can see, all names of the spam module are available in the own global namespace, thus no prefix is required.

Please note, that by default all names from a module will be imported when using the  from module import *  syntax. However, you can control which names should be imported via the __all__ list.

So, let’s modify the spam module a bit and add the __all__ list:

Now, if you do the same import as above, you’ll see the full effect of the changes above:

As you can see, the asterisk * now only includes the my_string name, because my_number isn’t included in the __all__ list.