I’m a good old fashioned Linux guy, moving towards my 30 years. When you start working with Linux, you come in contact with a terminal sooner or later, and therefor a shell. Most Linux distribution used bash as the default shell, and most of them still use it today.

As long as I remember, I named bash as my favourite shell. Of course I had to work with different shells, including csh, ksh and others. But to be honest, I hated them, because I just was used to Ctrl-R , Ctrl-A  and other bash-related gimmicks. I also liked to move around with my cursor keys, even if I’m kind of a vi-addicted sysadmin. So basically I wasn’t really open-minded, nor ready to give another shell a real chance. But as I grew up, I got more experienced and I started to look at things differently – in life and technology. So once upon time, on a long night, I started to dig into different shells, and finally I started to tinkering with zsh.

To keep it simple, zsh is like bash, but better… way better… I mean it’s like a shell on steroids! Hell this thing is awesome. Wikipedia describes zsh as:

The Z shell (zsh) is a Unix shell that can be used as an interactive login shell and as a powerful command interpreter for shell scripting. Zsh can be thought of as an extended Bourne shell with a large number of improvements, including some features of bash, ksh, and tcsh.

Enough of history, let’s dig into it.

I’m a Debian-guy, so here’s how you install zsh on Debian:

That’s it, quite simple via package manager. Of course you can do the same thing on RHEL, Fedora or CentOS. Just replace apt with yum and you’re fine (I hope so).

So it seems like the basic configuration of zsh is tricky, and to be honest it always was an issue for me. Fortunately there’s a workaround in form of an open-source and community-driven project called oh-my-zsh. This thing is really awesome, because it will manage your zsh configuration based on plugins.

To install this awesome thing, we get the install shell script from the github project page and execute it:

Now you should read the Using Oh My Zsh section to configure your ZSH shell. Oh-my-zsh is configuring your shell via plugins, which can be loaded individually, based on your personal needs.

Oh-my-zsh is supporting themes to configure your personal ZSH prompt. There are many themes bundled in oh-my-zsh, and you can find them in the github repo, or on the github wiki page (with screenshots). I started with agnoster, but then moved forward to powerlevel9k, which is a really awesome theme. 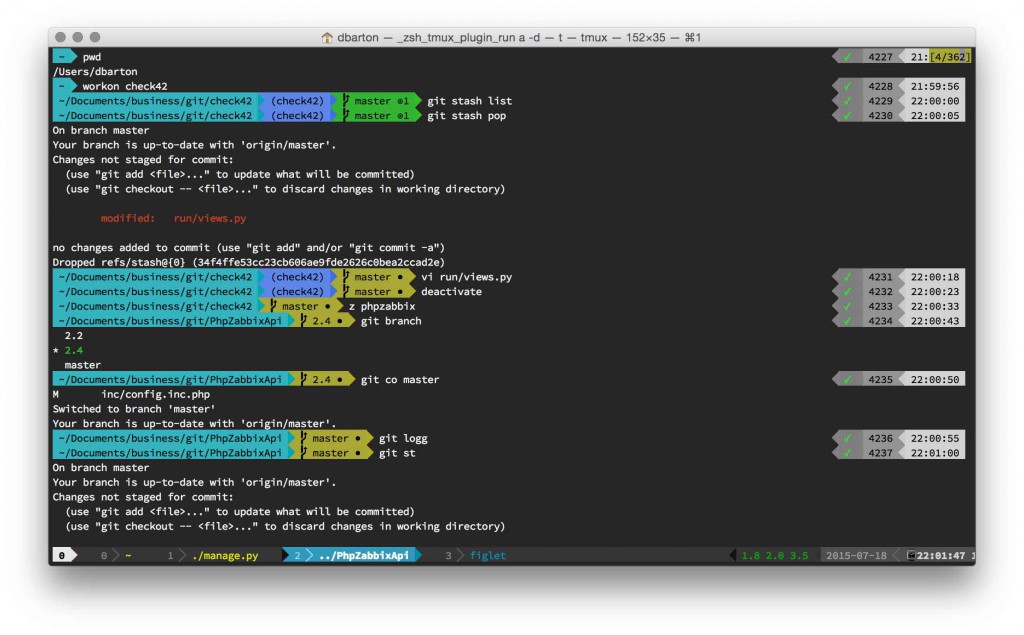 To install powerlevel9k, you can clone the github repo:

Now activate the theme in your ~/.zshrc  config and optionally configure the prompt (I need it for pythons virtualenv):

UPDATE: Unfortunately powerlevel9k updated recently, so the upper configuration is no longer working. However, you can have a look at my current config on github.

As I wrote before, ZSH is supporting the configuration via plugins, which is really nice. Here’s an example of the plugins I use on my Mac:

The former option activates interactive comments, so you can comments on your shell (i.e.  my-command # comment).
The latter reactivates Ctrl-R  to search the history.

This week is all about zsh, so stay tuned for more zsh tips over the next days!